Vijaya Kumar Manja was born in a traditional Brahmin family in the small town Pandeshwar near Udupi in South Canara in Karnataka, South India. Following the Vedic tradition, at the age of 8 he underwent ‘Upanayanam’, the sacred thread ceremony, initiating his spiritual education. After completing highschool (SSLC), he joined the legendary Sringeri Sharada Peetham, one of the four Advaita centers of education established by Shankaracharya (800 AD), famous for the high standard of teaching of the Vedas and Shastras. Vijaya completed three years of studies here, achieving the sahitya degree and thereby getting deep knowledge of Sanskrit literature and the text of Rig Veda.

After completing his studies in Sringeri, he went to Mysore to study at the Maharaja Sanskrit University College, one of the most ancient and well-acclaimed institutions of education in India as well as an important traditional seat of knowledge. Here he stayed more than 6 years, studying Sanskrit and philosophy with his respectable and learned guru Vidwan Gangadhara Bhat. He earned the ‘Vidwat’ degree in the disciplines of Naveena Nyaya (medieval Indian logic) and Advaita Vedanta (the system of metaphysics expounded by Sri Sankara) and also achieved distinction in both subjects. He also completed his Masters Degree in Sanskrit from the Karnataka State Open University. During this period, Vijaya attended various elocution competitions all over India and won many prizes, the most significant being the first prize in the national elocution competition in the subjects of Sankhya and Yoga. Vijaya has recently finished his Ph.D. with a subject of 'Yoga Cikitsa'; 'curative procedures prescribed in Yoga and Upanishads'.

Vijaya started his yoga asanas practice at the age of 16 and is still continuing a regular practice. In Mysore he started practicing the ashtanga vinyasa yoga system, during which time he also practiced the advanced series. He started teaching yoga in a small yoga-shala in the Shankara Vilas Sanskrit School in Mysore, gaining many devoted students. During this time, Vijaya also started teaching Sanskrit and yoga at Teacher Training courses arranged in different countries in Asia as well as in Europe by the acclaimed Yoga expert Alexander Medin, earning a high-class reputation also in the West. Recently he finished his Phd on yoga and he is currently writing a book about deeper spiritual aspects of yoga.

To share his knowledge within the field of yoga, Vijaya started a Yogagurukula in his home village Pandeshwar. His teaching includes every aspect of yoga; the study and understanding of the philosophy, the Sanskrit language, the traditional texts, the ashtanga vinyasa practice, pranayama, meditation and rituals, the spiritual aspect – every feature that is enclosed in the understanding of practicing yoga according to the yoga philosophy described in the Yoga Sutras by Patanjali.

He is the president of the local Rotary Club in year 2017-18 and also the main priest in the village temple called "Shankaranarayana Temple" where he performs the daily pujas. He lives with his wife Bhavya and his mother Amma who are also important part of the Yogagurukula by taking care of students and preparing delicious South Indian food. New jeeva, a baby boy, was born to them in July 2017 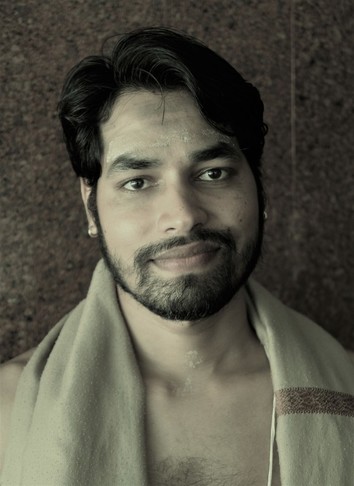 " Yoga is not just asanas, it is a life time practice. A way to live."  - Vijaya